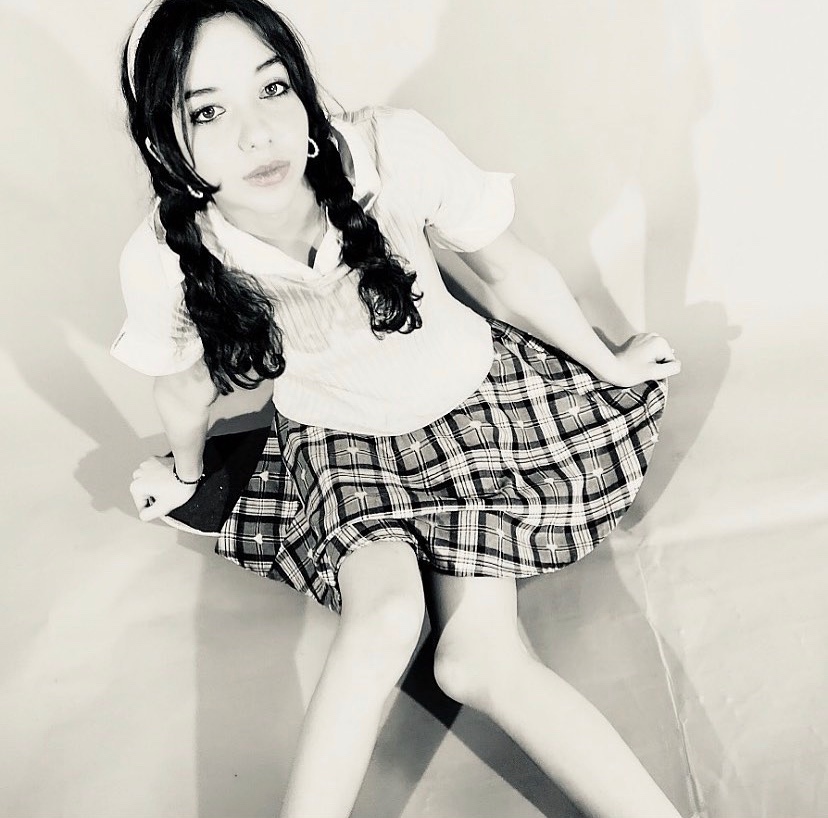 SO GLAD YOU’RE HERE, SOFIA! CAN YOU TELL US A LITTLE BIT ABOUT YOURSELF, WHO IS SOFIA DELICARI IN YOUR OWN WORDS?
I am an artist, a storyteller, a poet, and a musician. I am someone who is observant, intuitive, and admires beauty, not simply in a conventional way but rather in finding beauty in the darker elements of life or finding a way to transpose those in a captivating way through art.

WHAT FIRST GOT YOU INTO MUSIC?
I grew up surrounded by stories based on my parents’ cultural backgrounds — mainly Greek mythology, as my mom is Greek. I always loved anything involving music; my dad is Puerto Rican, so I grew up surrounded by vibrant rhythms. As I got older, I started experimenting with combining poetry with melodies and bridging those two art forms into a single format of ultimate expression.

WHAT KIND OF SINGER WOULD YOU CLASSIFY YOURSELF AS?
I would define myself as more of a storyteller than a singer. I think each song has its own character and story, and sometimes certain pieces can be sewn together to make a long story. Based on the song’s story, which translates differently in terms of musical style; but predominantly based on influences and the stylistic elements of my story, my music has evolved into a fusion of indie and alternative.

DID YOU HAVE A PARTICULAR ARTIST THAT INSPIRED YOU TO TAKE THE PATH OF A MUSIC CAREER?
There are almost too many, but I would say it’s mainly the artists that cultivate extensive versions of their characters onto a stage and inspire their audiences to become their most authentic selves. I’ve been very inspired by David Bowie and the different stage personas he takes on throughout his discography in terms of career path. I’ve noticed I subconsciously do that in most of my songs, which is typical for both an actress and a storyteller. Having characters and personas allows an artist to extend into a parallel or alternate identity of themselves and allows for diversity in product based on which perspective you become in tune with

TELL US SOMETHING ABOUT YOUR LATEST SINGLE, “SUBURBAN HORROR”
Suburban Horror is a song from my most recent EP, Suburban Horror. The song follows the deconstruction of societal norms and the rebirth of character from the ashes of expectation.

WHAT SPARKED THE IDEA FOR “SUBURBAN HORROR”?
I coined the term “Suburban Horror” after writing a series of poems inspired by the idea of a classic Americana lifestyle and the concept of the American dream with generational core elements. I took a step back and mumbled to myself that these poems were “A Suburban Horror.” The verses were inspired by the cycle of the day; sunrise, dawn, sunset, and dusk, and where each poem I’d written visually described those times of the day. For the chorus, I make a commentary on America’s taboo on the discussion of sex (as a metaphor for general indulgence or self-expression), describing Suburban Horror as the “Suburban Whore”.

DO YOU HAVE ANY ARTISTIC COLLABORATION PLANS?
I go to Fiorello LaGuardia High School, so I’m surrounded by so much talent every day. I have several friends who are musicians, and I have been in discussions with them about future collaborations and concept ideas. Some of these projects include an upcoming performance with my friend’s band, an acoustic EP written and self-produced with another friend, and co-directing a music video for my new single, Electric Violet.

ANY UPCOMING PROJECTS YOU CAN TALK ABOUT?
On January 26, 2022, I’m releasing my new single, Electric Violet. I wrote the first draft my freshman year, so it means a lot to have seen it grow and follow me through my high school experience. My edits and add ons over time have shown me how I’ve grown as a lyricist and musician, but also how I’ve maintained certain core elements of my style and inspiration.

WHAT IS ONE MESSAGE THAT YOU WOULD LIKE TO GIVE TO YOUR FANS?
Find your weaknesses and play them as your strengths. Oftentimes the events or qualities of ourselves that we define as flaws are what make us beautiful, unique, and compelling artists.

WHERE CAN OUR READERS FIND YOU ONLINE?
Sofia Delicari on all streaming platforms!
Instagram: @sofiadeltiz, YouTube, Snapchat: @sofiadeltiz, Spotify, Apple Music
And here is my website: https://www.sofiadelicari.com

How Companies Benefit From Employee Outplacement And Offboarding

Jeremy Parsons Answers ‘Who Is Lillian?