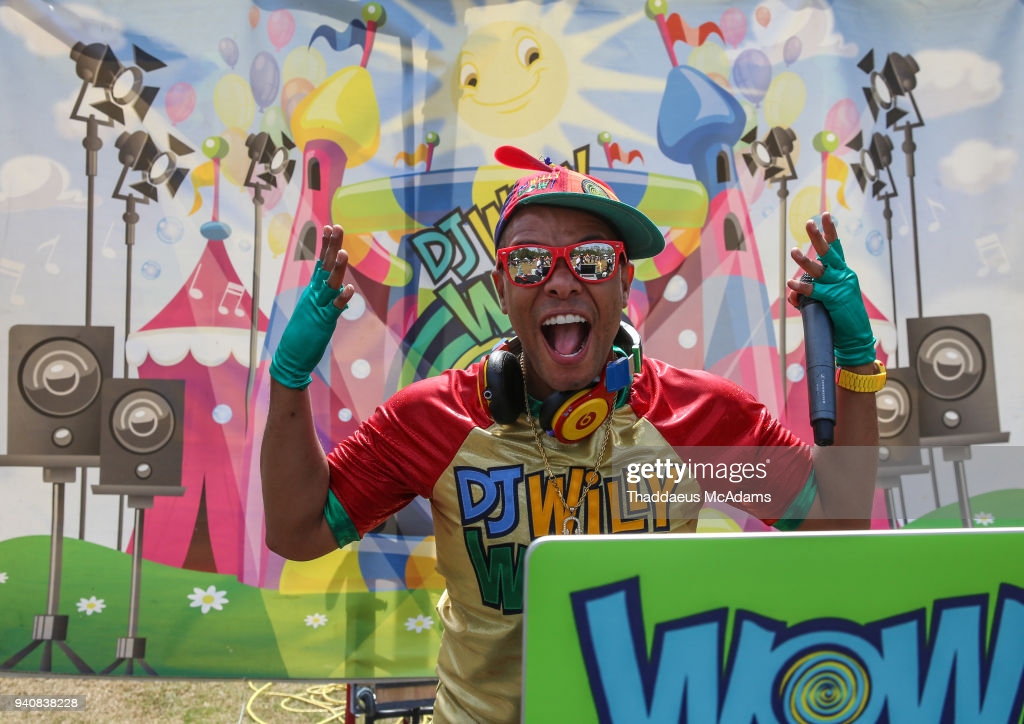 HI! THANKS FOR TAKING THE TIME TO CHAT WITH US! CAN YOU TELL US A LITTLE BIT ABOUT YOURSELF, WHO IS DJ WILLY WOW IN YOUR OWN WORDS?
Thanks for taking the time to interview me. This is a great question to kick off with.
DJ Willy Wow is multi-faceted creative.

What many see is the performer. Yes, I was blessed with a gift where it’s easy for me to put words on paper and turn it into an explosive performance.  But what people don’t see — is that what I do puts me at the nexus of not only music but fashion, education and advocacy.

When I show up, I am there with a colorful outfit sharing songs that either teach or advocate for something on a child’s behalf.
Not all people are lucky to be able to bottle up what makes them magical into one space—but being DJ Willy Wow does. That’s me.

HOW LONG AGO DID YOU BEGIN DJING? AND WHAT, OR WHOM, WAS THE CATALYST WHICH BROUGHT YOU INTO THE ART FORM?
Deejaying started for me at age 8. I received a Fisher-Price record player from my parents and I spent a whole year spinning Disco Disney. My uncle, who was one of Baltimore’s greatest deejays, helped me to sharpen my art form. He would let me go through his crates of records and show me how to put songs together and provide transitions to make people want to get up and dance.

WHAT ARE SOME OF THE KEY MOMENTS IN YOUR CAREER THAT HAVE ELEVATED YOU TO WHERE YOU ARE TODAY?
1. Performing at the White House, to help launch Michelle Obama’s Let’s Move! Initiative to curb childhood obesity.
2. Writing more than 200 songs and produced more than 20 videos that kids absolutely love.
3. Winning the 2020 Independent Music Award – Best Music Video (Social Action) for his song “MLK THAT WAY(featuring. Chuck D)”. This made him the first children’s artist in the award’s history to receive this accolade.
4. Being recognized as one of the top 25 Virtual Entertainers (#11)  in May 2020 by Parade Magazine.
5. First guy with two turntables and microphone with a show on Sirius XM FOR CHILDREN AND FAMILIES 🙂

AS A DJ, WHAT DO YOU PREFER THE MOST – THE CREATIVE PRIVACY OF YOUR STUDIO OR SPINNING MUSIC FOR A GROOVY AUDIENCE?
My craft feeds off of crowd energy and improv which often leads to unforeseeable amazing interactive moments. So being in front of a crowd — whether virtually or in-person is what I love the most. When I spin in the privacy of my home I feel that is more practice before the performance. Oftentimes in a private space I am organizing songs, researching old and new music, and exploring technology. Actually, in 2022 my first app will be released.

HOW MUCH HAS YOUR LIFE CHANGED AFTER WINNING THE MUSIC VIDEO OF THE YEAR AWARD FOR “MLK THAT WAY”?
Winning definitely provided me exposure to a new audience that didn’t know me. But more so that acknowledgement showed me the thirst that is out there for kids to better know and understand history. So it put me on a path to create a musical series about important African American men and women in history. Since that win I have put songs about Stevie Wonder and Muhammad Ali and coming soon is a song about Michelle Obama.

YOU ARE THE FIRST DJ IN HISTORY TO PERFORM WITH PORSCHE AT THE PRIDE; PLEASE TELL US SOMETHING ABOUT IT?
The Atlanta Pride Parade was an amazing experience! This is one of the best events I’ve participated in by far. Celebrating inclusion at its peak was truly an honor. Representing a brand like Porsche in their first Pride Parade and providing the soundtrack for a rainbow fleet of sports cars will definitely put you in the driver’s seat of love!

WHAT’S SOMETHING WE SHOULD KNOW ABOUT YOU THAT MIGHT SURPRISE US?
I’ll give you a few things:
* I’m addicted to Golf
* I love Froot Loops!
* I won a Spelling Bee in the 3rd Grade!

WHAT ADVICE WOULD YOU GIVE ASPIRING ARTISTS THAT ARE TRYING TO BREAK ONTO THE SCENE?
Keep going. We live in a microwave society where people often to say no or yes without much thought. Oftentimes you hear no. But that does not mean you are not talented. You just have to keep going. Hone your craft and find other lanes to share your creativity. It’s cliche but real “Rome was not built in a day”

WHAT IS ONE MESSAGE THAT YOU WOULD LIKE TO GIVE TO YOUR FANS?
You can never go wrong doing the right thing.

SehgalMotors.PK Announces to Expand to All major cities in Pakistan by 2022