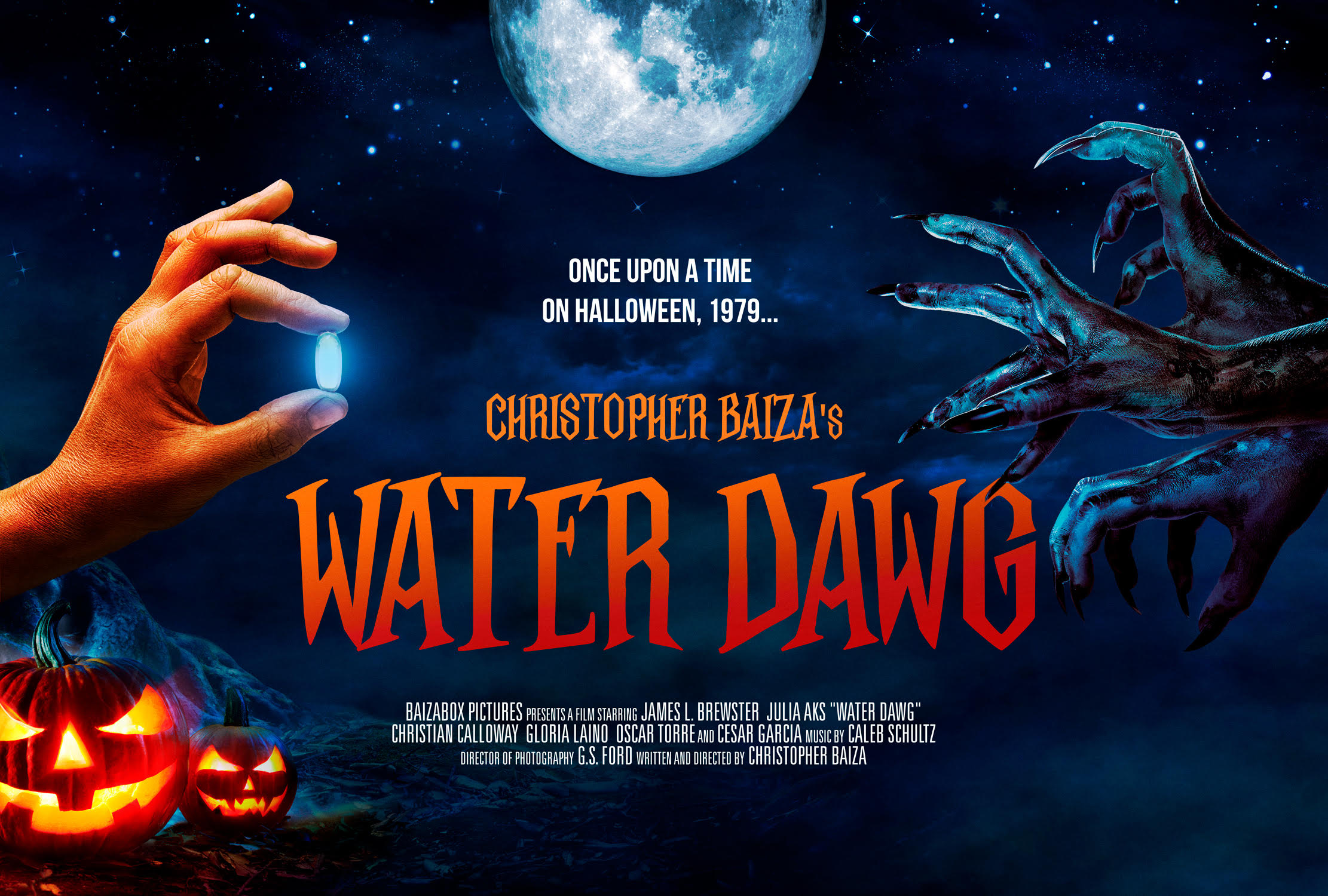 HI CHRISTOPER BAIZA, WELCOME TO ABOUT INSIDER! THANKS FOR TAKING THE TIME TO CHAT WITH US! CAN YOU TELL US A LITTLE BIT ABOUT YOURSELF?
Hi, my name is Christopher Baiza, I grew up in the southeast region of Los Angeles. Some might say I grew up in the “barrio”. I wouldn’t disagree. Growing up in an enriched Mexican community, I was drenched in folktales, old Mexican classic cinema, and inspired by old black and white films. I knew I needed to be part of the process to make movies. However, before filmmaking, I started as an actor. Back then, that’s all I wanted to do (during my youthful years). I had the utmost pleasure of joining an actor’s studio in Hollywood, studying the craft and being coached by my former teacher, Bill Alderson, who taught me so much. During this crucial stage in my personal development, I began to understand the writing process through the actor’s point-of-view, and so I began to pursue screenwriting. Today, WATER DAWG marks a milestone in my career as my second film since my first award winning film MYRA.

WHERE DID YOU GET THE IDEA FOR WATER DAWG?
Funny thing about this, the name WATER DAWG derived from a pet store, where as a kid, the owner showed us some lizard-like amphibians known as “Salamanders”, but he called them “Water Dawgs” because he said they looked like swimming “dawgs”! And so, fast forward to 20 years or so later during the Halloween season of 2018, I started to get really obsessed with George Romero’s movie “The Night of the Living Dead”, so I decided to write a fantasy-horror revolving around the Halloween holiday. Then I developed the main character, “Water Dawg”, who takes us on a bizarre journey into funeral party services. This fantasy-horror idea helped me flush out other characters I had in mind and so I started to see the creative progression and explored it even further with zombies, psychedelics and odd characters. The characters I developed were like a culmination of inspired odd-balls from The Adams Family or The Munsters I found to be interesting.

HOW IS IT DIFFERENT FROM OTHER HORROR STORIES?
Well, I think stories are always different, never true duplications of past films, but truly inspirational for future films, for sure. WATER DAWG, I feel, is unique in its creative and stylistic ways weaving through scenes with cringy cinematic foreplay before erupting in chaos. Although zombies have been done many times before, I think I approached my zombie characters in Romero’s format, and used music as a tool to creatively guide audiences emotionally.

HOW LONG DID IT TAKE YOU TO FINISH THIS FILM, FROM PREPRODUCTION TO GETTING IT INTO THEATERS?
WATER DAWG took about 5 years to make. I first began drafting the script in early 2018 and went right into pre-production mid year. We shot two scenes near Halloween of that same year. In 2019, we were in full production and I managed to shoot all the scenes I needed, but by this time I was already editing the movie. Then, the most significant thing happened… The PANDEMIC HIT.. And the world stopped. At this point, I was stuck with a film in post-production, and felt uncertain about the future as most of us did. So, from 2020 to 2021 I took the time to really finase the film in detail. I edited everything I thought needed cutting, and really took the moment to craft the film out. During this time, I really dove into musical planning, sound design, and everything else needed before I landed in the studio mixing room. I had TWO YEARS of free time to make this film something special, TIMELESS (I thought) and I think I did just that. I’ll let the audience be the judge. But, this film kept my sanity during the pandemic, and I was really happy with the final cut. I did things in the edit room I wouldn’t have thought of not given the amount of time on my hands. I just really wanted to make a great Halloween film.

THERE ARE A LOT OF PEOPLE AND SKILLS INVOLVED IN MAKING A MOVIE. TELL US SOMETHING ABOUT YOUR CAST AND TEAM.
WATER DAWG’s cast is a very diversified one. This film is about a funeral party service planner who primarily serves minority folks in the deep south. Some of the main players in this film come with real acting chops and resulted in lots of wonderful performances throughout. I was lucky to have had such a great set of actors in this film. At the top of the billing list is Christian Calloway from Twin Peaks (by David Lynch) and The House with a Clock in Its Walls (by Eli Roth). Grayson Thorne Kilpatrick, who’s a rising star, plays one of the misfits in this film, he’s also known for Ryan Murphy’s American Horror Story and Black Pumpkin. Another fantastic actor in our list is Cesar Garcia widely known for Breaking Bad and Better Call Saul as well as Gloria Laino from the hit show What We Do in the Shadows and Oscar Torre from The Hangover, Gaslit, and Taylor Perry’s The Haves and the Have Nots. We have a super great overall cast with more stars who committed  to this project and performed fantastically spooky.
Our film crew was small, but strong. I had one Cinematographer, G.S. Ford, who managed various roles of electrical grip and gaffing, one makeup artist, two sound mixers, one P.A. and myself wearing various hats including set building, wardrobe, and set decorating, plus executive producing (short for picking up the tab). It was a very manageable crew.
For post-production, I turned to our first Music Composer from my last film, Caleb Schultz. The music experience in WATER DAWG was something like a moment out of Woodstock. We literally rocked out through clouds of haze while making music on various areas of the film for three months straight. Music has always been a big part of the process for me. For the film’s final sound editing and design, we went with one of Hollywood’s great sound professionals Ugo Sound Studios in Burbank, California. I was the film editor, so I had the final cut which, to me, is the final draft of the story. I’m very big on editing and everything else in the post-production process, I very much enjoy it.

WHO DO YOU THINK IS THE TARGET AUDIENCE FOR THIS MOVIE?
I think anyone who loves musical scores in film, horror and Halloween genres, and perhaps folks who love a good twisty, spooky story. When I set out to make a film, I always start from the bottom of Mountain Everest every time! I start with a blank page and flush out the ideas. At the end of the day, I make movies only I would enjoy, I hardly ever think of the audiences when I’m writing and conceptualizing. I always make movies for me, first. It’s the truth. Look, I just feel that if anyone loves movies, they can’t go wrong making them. But, you have to love the process.

ANY UPCOMING PROJECTS YOU CAN TALK ABOUT?
One of my upcoming projects currently in post-production is a short, Christmas, Fantasy-drama titled XMAS due to release in 2023. It stars Ian Petrella from Bob Clark’s classic A Christmas Story. Fun fact, Ian Petrella just recently worked on A Christmas Story 2 with some original cast members, including Peter Billingsley, directed by Clay Kaytis, releasing on HBO later this year. You can find XMAS on Instagram and Twitter @ xmas_team or IMDb search: XMAS.
Another upcoming project I’m currently working on is a feature film titled 3FLOWERS due to release late 2024. It’s a crime-drama that follows a Mexican American family in East Los Angeles, beginning from the Zoot Suit era of the 40’s, the progression of gang culture in the 70’s, to the evolutionary stages of the early 90’s. You can find 3FLOWERS on Instagram and Twitter @ 3Flowers_team or IMDb search: 3FLOWERS.

WHERE CAN OUR READERS FIND YOU ONLINE?
You can find us on:
Instagram – @waterdawg_team / personal IG – @christopher_baiza
Facebook – @Water Dawg movie
Twitter – @WaterDawgFilm
IMDb – Water Dawg