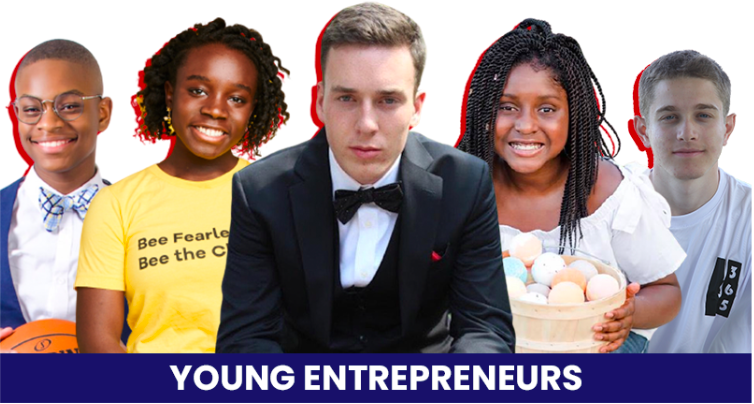 Gone are the days when business was only a thing for adults. Most successful entrepreneurs started when they were younger and have since evolved into today’s multi-millionaires and billionaires. We feel it’s only right to recognize today’s successful young entrepreneurs.

Here’s a list of 10 young entrepreneurs making waves in 2021:

Brendan Cox is a serial entrepreneur based in New Jersey recognized for founding Cox Visuals, a full-service social media branding agency powered by Generation Z.  Cox has also been involved in various other endeavors such as co-founding Business Blurb, one of the biggest players in the entrepreneurial media space alongside Devin Caherly.

Mikaila Ulmer – Founder of Me & the Bees Lemonade

Mikaila Ulmer is a young entrepreneur who is popular for her lemonade stand business which was inspired by her grandmother’s 1940s recipe which uses honey from local beekeepers. She’s since built on her success and looks to expand her business to greater heights.

Eli Zied is a young American entrepreneur who has become popular for his clothing brand known as Habits 365. His personal brand portrays a lifestyle that encourages positive vibes all day, every day for 365 days.

Jelani Jones built on her love for bath products and eventually transformed her dreams into reality with the creation of her Lani Boo Bath brand. The young entrepreneur has been able to turn her bath product hobby into a lucrative career and looks to expand as time goes on.

Young Hannah accepted her father’s challenge to create the same products she loved from her beauty and health stores. A 10-year-old went on to create her own brand of bath bombs now known as BeYOUtiful. The young entrepreneur has her products on display on her self-titled website where they are all available.

Maddie Rae’s Slime Glue is not one of your everyday products. Maddie combined her love for making slime with her difficulty in finding glue in stores to produce a truly unique product. It was a long time coming with ups and downs but 12-year-old Maddie was equal to the task. After series of trial and errors, she finally got it right and has expanded her online store to feature several types of slime, glue, and slime accessories.

Brandon and Sebastian Martinez – Founders of Are You Kidding

Only 12 and 13 years respectively, Brandon and Sebastian have created funky and creative socks to elevate people’s style while also donating to the Juvenile Diabetes Research Fund And Autism Speaks cause. Their company Are You Kidding has been able to partner with some schools across the United States to provide socks for school fundraisers.

13-year-old Sofi has brought it home with her Wise Pocket innovation. Sofi’s products have brought the customer’s dreams closer to them. So if you were wearing socks or leggings and wishing there were pockets in them, Sofi Overton is here to grant your wish! The young entrepreneur has created a sock with a pocket that can securely hold a phone in it. Sofi also sells leggings with pockets as well.

Maya’s Ideas was founded in 2008 by a young Maya with dreams. Maya’s company sells environmentally sustainable fashion accessories. She is also the brain behind Maya’s Ideas 4 the Planet where 10% of the profits go to charities and environmental organizations.

As a 9-year-old kid, Moziah started Mo’s Bows in his grandmother’s kitchen. Years later he is still on the top of his game. He has revealed that his burning desire to find a sharp-looking fashion accessory was the inspiration for his business. His business has gained international recognition and encouraged Moziah to study fashion design in college. Moziah’s company is also in the business of producing neckties, pocket squares, and apparel in addition to his bowtie business.

Investing in your community with Favel Transportation

Boosting Student Engagement in the Educational Process Due to the Internet

Dr. Casuel Pitts is a Pioneer to the World!